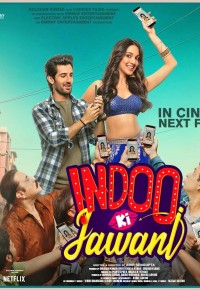 INDOO KI JAWANI is the coming-of-age story of a girl who experiences life through misadventures and dating apps. At the Delhi-Ghaziabad border, cops try to stop a Black Scorpio car at the check post. But the occupants of the car refuse to show their identity and escape. They also fire at a cop. The cops led by Avinash Nigam (Iqbal Khan) find the car outside a house. The terrorists are nowhere to be seen but the police find explosives inside. Soon they find one occupant of the car, a Pakistani, and the hunt begins to find the second person.

Meanwhile, in Ghaziabad, Indira Gupta aka Indoo (Kiara Advani) is having a tough time with her boyfriend Satish (Raghav Raj Kakker). Satish wants to sleep with Indoo but she is apprehensive. She then agrees to come to his house at night and later, has a change of mind. Hence, a desperate Satish asks a girl from Indoo's colony, Alka (Lisha Bajaj) to spend the night with him, despite the fact that Alka is getting married to someone else next week. Meanwhile, Indoo's best friend Sonal (Mallika Dua) tells her that she should take the plunge and sleep with Satish. Hence, she lands up at Satish's place but finds him in bed with Alka. Indoo breaks up with him immediately. At Alka's wedding, Indoo is lusted by not just young boys like Kittu (Shivam Kakar) but also old-aged men like Prem uncle (Rakesh Bedi), Ranjit uncle (Rajendra Sethi) and Pran uncle (Chittranjan Tripathi). Kittu mixes alcohol in Indoo's drink and this leads her to dance like crazy. Her reputation in her neighbourhood gets tarnished. The next day, Indoo's parents (Rajesh Jais, Alka Kaushal) leave for Delhi to get the admission done for Indoo's brother Bunty (Harsh Sharma). They request her not to do any more drama.

A lonely Indoo, still sad about the break-up, agrees to Sonal's idea of using a dating app to find a guy for one-night-stand. Sonal believes that this will help her in her next relationship. On the app, Indoo matches with Samar (Aditya Seal). After a brief chat, Indoo invites him home in the evening. The same day, she finds out from Prem uncle, Ranjit uncle and Pran uncle that a terrorist from Pakistan is roaming in Ghaziabad. In the evening, Samar reaches Indoo's place. Samar turns out to be a thorough gentleman. Indoo attempts to get intimate with him but gets nervous. She calls Sonal who motivates her to seduce him. Indoo decides to do so and in the process, Samar's passport falls from his jacket. This is when she sees that Samar is a Pakistani! This development terrifies her. She also wonders if
he's the same terrorist that the police are trying to find. What happens next forms the rest of the film.
Read More