Ravi Kapoor lives a wealthy lifestyle with his widowed mother and runs a construction business. His mother would like him to get married to foreign returned Seema, who also comes from a wealthy family, but Ravi is in love with a poor orphan, Sharda, and brings her home to introduce to his mom, who instantly disapproves of her, leaving Ravi no choice but to leave the house and live separately with Sharda. His mom does relent and change her mind when she finds out that Sharda is pregnant and welcomes her home.

Things change when Sharda meets with an accident, has a miscarriage, and is told that she will never be able to conceive again. She then disappears from Ravi's life. His mom brow-beats him to marry Seema, which he does, and soon she gives birth to boy named Vijay. Years later, Vijay has grown up and has acquired a number of bad habits, which include alcohol, womanizing, and physical altercations.

One such altercation lands him in the bad books of powerful underworld Don, Samrat, who wants him dead. Vijay, following his dad's advice, goes into hiding at Shanti Dham Ashram. When Seema is told about this, she is enraged at Ravi, especially when she finds out that Sharda is still alive and is the owner of Shanti Dham. Watch what Seema does to free her son and husband from Sharda's clutches (IMDB)
Read More 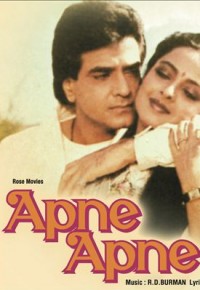