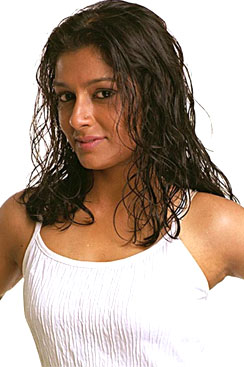 Nandita Das the dusky beauty is determined to make a mark in quality films. She has come into her own, with her kind of talent and choosy nature. She is the daughter of painter Jatin Das.

She has debut in Hindi cinema with a controversy film Fire in 1998, which was based on a lesbian relationship. She says that the scenes and situations in Fire were not created to titillate. Rather, she clarifies that the character in Fire enters a lesbian relationship only due to circumstances. The young actress says she has no regrets doing the film.

After that she has done many Art and Commercial Hindi films. In 1998 her another film was Hazaar Chaurasi Ki Maa. Then in 1999 Rockford and 1947 Earth opposite Aamir Khan and Rahul Khanna, which was also a contrversial film. Hari Bhari in 2000 and Bawandar in 2001.

From Fire to Earth she then goes on to deal with her reflection in Rakesh Mehra's Aks in 2001. Some feel that it is a deliberate effort on her part to get into mainstream cinema. But she is insistent that there is much more substance to her decisions, something we call instinct and gut. Her talent, her attitude and her belief in herself, and the work she does, are the surviving elements that have helped the actress surpass the limitations of a petty mind and claustrophobic thinking.

In 2002 Lal Salaam and Pitaah. In 2003 she had done a negative role in Supari. The other films were Ek Din 24 Ghante and Bus Yun Hi.
Buy
Nandita Das
Movies