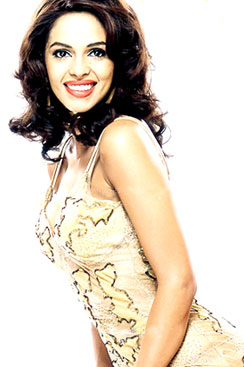 Mallika Sherawat was born in a conservative Jat family. She is a graduate in Philosophy from Miranda house, Delhi University. Mallika Shehrawat was an airhostess for some time. She married a pilot named Karan Singh Gill. Mallika Sherawat was such a dreamer that her husband Karan Singh Gill found it hard to adjust to her and soon they parted ways. Meanwhile, Malika got some modeling assignments and she entered in the glamour world. Later she modeled for some popular brands like BPL and SANTRO with Amitabh Bachchan and Sharukh Khan.

Mallika Shehrawat made her debut in the Bollywood with the film "Khwaish" directed by Govind Menon. The film "Khwaish" was in the news because of seventeen lip-lock kiss scenes. The movie failed miserably at the box office but Mallika didn't go unnoticed. She was offered another steamy role in the film "Murder" directed by Mahesh Bhatt. The film "Murder" was super hit at the box office and Malika Sherawat was nominated for Zee Cine Best Actress Award. Since then Mallika didn't look back. Mallika was also featured on the cover page of an international magazine- Snoop, which is the Indian edition of Cosmopolitan.

It was in 2003 that Mallika made a lot of noise in Bollywood with the release of Khwaish with Himanshu Mallik. The movie was on the lines of Erich Segal?s Love Story and received a lot of publicity for the number of kisses onscreen between the lead pair.

Anurag Basu?s Murder (2004) was based on the Hollywood movie Unfaithful and was a fatal love triangle between Sherawat, Emraan Hashmi and Ashmit Patel.

She worked with Rekha in Bachke Rehna Re Baba (2005) as a gold digger. Her appearance in Jackie Chan?s The Myth received a lot of attention and she turned heads as she appeared at the Cannes Film Festival.

2006 to 2008 Mallika and Rahul Bose got together in a comedy Pyaar Ke Side effects (2006) that was an average success. Her other movie in 2006 was Darna Zaroori Hai. Her item number in Mayya Mayya in Guru was popular. She took on a negative role, albeit a brief one, in Aap Ka Suroor (2007) with Himesh Reshamiyya. Anees Bazmee?s multi-starrer Welcome (2007) was a big success.

In 2008, she was part of the large scale Kamal Hassan starrer Dasavatharam, a Tamil movie. She played the role of Jasmine. Ugly Aur Pagli (2008) with Ranvir Shorey was another comedy that received moderate response. Sherawat and Rahul Bose were paired together in Maan Gaye Mughal-e-Azam (2008), a comedy.
Buy
Mallika Sherawat
Movies