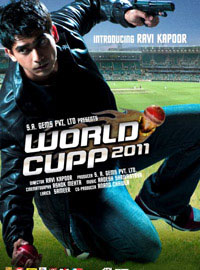 The backdrop of the film is sports. The film deals with the game of Cricket. Antagonism for World Cupp 2011, Indians team is going on and teams from different countries are participating. One of the very strong player Ravi Indulkar from India.

In the end of the last decade of the 20th century, a slow but sure dispute between gangsters created roughness in the underworld. Some very high profile people and businessman were extorted, but the media covered this news extensively and the government took a strict action against the underworld.

And the braking impact was created when home minister R.R.Patil completely banned the dance bars in Mumbai.

In such conditions when circumstances was not so good. Then underworld centralized attention on sports as a source of making money, and they aimed the most glamorous game "Cricket". Ravi Kapoor is playing the main lead, as Caption Ravi Indulkar of the Indian Cricket team. His four friends Rajpal, Hiten, Irfan and Balwinder, they fix a World Cupp match held in 2007 against Pakistan with a bookie- Shobhan. And then the twist as always they are exposed by press reporter Balakrishnan. BICI bans the caption Ravi Indulkar and his four teammates for four years. Ravi's girlfriend Soha (Manisha Chetterjee) also leaves him because of his deeds and in the mean while Ravi also loses his dad.

The coach once again gives chance to Ravi and his four teammates after proving their patriotism to play World Cupp 2011. Once again India faces its arch rivals Pakistan in final. Everyone has a doubt in their mind and as we know history repeat itself, king of bookies Shobhan once again tries to fix the match with the help of Ravi. This time Ravi refuses his offer, in retaliation he kidnaps Ravi's girlfriend Soha who is Physiotherapist of Indian cricket team. As soon as Ravi comes to know about Soha's kidnapping he informs the Home minister who then puts a encounter specialist on this job. The encounter specialist rescues Soha at the risk of his life. On the other hand Ravi is struggling to win World Cupp 2011.
Read More