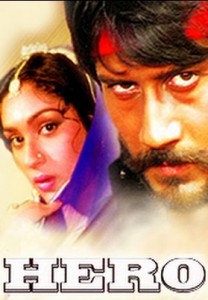 The film starts off with Pasha (Amrish Puri) being taken to prison. To get out of the situation, he writes to his best man, Jackie (Jackie Shroff). Jackie goes to Shrikanth Mathur (Shammi Kapoor) and warns him. He then kidnaps Shrikanth?s daughter Radha (Meenakshi Sheshadri). He tells her that he is a police officer and they fall in love; however, she finds out that he is a goon. Nevertheless, she does not leave him but urges him to surrender.

Transformed by true love, Jackie surrenders himself to the police and is imprisoned for two years. Back home, Radha tells her brother Daamodar (Sanjeev Kumar) the whole truth. To keep Radha from getting married to somebody else, he calls his friend Jimmy (Shakti Kapoor) to put on a show that Radha and Jimmy love each other. Jimmy misunderstands the situations and actually falls in love with Radha. When Jackie comes back, he starts working in a garage and tries to reform himself.

Despite everything, Shrikanth kicks him out of his life. After many days and events that follow, Daamodar finds out that Jimmy is a drug smuggler. After getting released from prison, Pasha desires revenge against both Shrikanth and Jackie, so he kidnaps Radha, Shrikanth and Daamodar. Jackie comes at the last moment and frees all of them. As a happy ending, Shrikanth lets Radha marry Jackie.
Read More