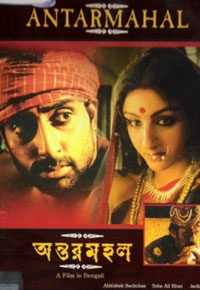 Thunder clouds in the sky; a boat draws up to the jetty. The awed bystanders see that the boat is dominated by the portrait of a woman in a crown, a larger than life portrait that towers over the boatmen with almost threatening power, casting a cloud darker than the weather...

The year is 1878. Queen Victoria has been declared Empress of India for over a year and her power casts a long shadow over the subcontinent. So long that reaches into a remote village in the backwoods of Bengal. There, Bhubaneswar Chowdhury (Jackie Shroff) rules as zamindar, tyrannical, whimsical, the last of his line. A man obsessed by the desire for power and the desire for an heir.

He has a pet cat, an English painter acquired along the way and two wives (Riama Sen and Soha Ali Khan). He decides that the best way to augment his power and rise in esteem among the British rulers of India is to celebrate Durga Puja with a difference. To shape the goddess in the image of Queen Victoria. He therefore orders the portrait from Kolkata and brings a Hindustani sculptor (Abhishek Bachchan) into the House to shape the image. All this while his own portrait is being painted by the English artist. And while he feverishly labours to impregnate his younger wife.

In the context of 19th century Bengal, the situation is unnatural in more ways than one. It bodes violence and jealousy. A vortex builds and begins to spin out of control.

Antarmahal is a story about the corruption of power and sexual jealousy. A very Indian story about the lengths to which superstition and despair will drive a man.
Read More