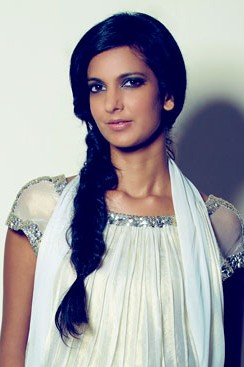 Poorna Jagannathan is an American actress and producer came to prominence after starring in the Bollywood film Delhi Belly opposite Imran Khan.

Jagannathan portrays Saya Katdare on USA network?s Royal Pains. She has also appeared on TV shows like Law & Order, Rescue Me, Love Monkey and The Game.She was recently was seen as Mira in Peace, Love and Misunderstanding starring Jane Fonda and Catherine Keener, directed by Oscar winner Bruce Beresford. She also joined the ensemble cast of Thanks For Sharing, starring Gwyneth Paltrow, Tim Robbins and Mark Ruffalo, directed by Oscar nominee Stuart Blumberg, which released in September, 2013.
Jagannathan is an established theater actress and is part of The Barrow Group in New York City. In 2012, Deadline.com reported that Jagannathan had joined the cast of HBO?s new show Criminal Justice as a series regular. The ensemble cast was led by James Gandolfini and was written and directed by Steven Zaillian and Richard Price. The project was shot end of 2012 but was shelved by HBO. It got revived in May 2013 and was slated to start shooting again with Gandolfini in 2014.[6] After Gandolfini?s death, Oscar winner Robert De Niro stepped in to take over the role originally played by the beloved Sopranos star in the pilot. Production is eyed to begin in March, 2014

In 2013, Jagannathan portrayed Riyana Sarai in the Ranbir Kapoor starrer Yeh Jawaani Hai Deewani. The movie has become the third highest grossing Bollywood film of all time in India and worldwide. The film was written and directed by Ayan Mukerji and produced by Dharma Films.

Moved by a sensational gang rape and murder in Delhi on December 16, 2012, Jagannathan initiated and co-produced a testimonial play called Nirbhaya ("Fearless", a pseudonym given to the victim). The play reportedly explores sexual violence in Indian society. She collaborated with internationally acclaimed playwright and director, Yael Farber. Nirbhaya opened at the Assembly Hall in August 2013 during the Edinburgh Fringe Festival. It won the coveted 2013 Amnesty International Award as well as the Scotsman Fringe First and Herald Angel Awards. It got 5 star reviews from The Independent, The Telegraph and The Herald. It got 4 star reviews from The Times, The Scotsman, the London Evening Standard and Time Out. The Sunday Herald called Nirbhaya "One of the most powerful and urgent pieces of human rights theatre ever made".

Jagannathan won critical acclaim for her role as a spunky, irreverent journalist in the film Delhi Belly. The Village Voice said "For all this censor-board razzing, the most enjoyably subversive element is Poorna Jagannathan as the self-sufficient bachelorette who waylays Tashi on his way to the altar. Rangy, corkscrew-haired, with a wary demeanor that can?t long be upset by anything, she?s a happy departure from the usual run of Xeroxed, pedestaled beauties." Mumbai Mirror said, "Poorna Jagannathan, an offbeat choice, is remarkably subtle and does a brilliant job." The Daily News and Analysis was of the opinion that Jagannathan shines in the film, and that "her bohemian sex appeal" is "a refreshing change from the prim and proper ?heroine? we are used to watching." The editor of Outlook Lounge said that Jagannathan?s performance was a "masterclass in effortless acting".