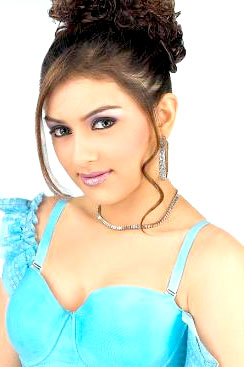 Hansika Motwani, driven by her looks, talent and a good dose of luck, can boast of a wide range of experience as a model and actress.

Hansika Pradeep Motwani was born on 9th August 1991 to Pradeep Motwani, a businessman and Mona Motwani, a dermatologist. She has completed 12th Grade from Podar International School. She is fluent in English, Hindi, Tulu and Telugu.

Hansika began her television career with a serial called Shakalaka Boom Boom, a story about a boy named Sanju and his magic pencil. Simultaneously, she also acted a child's role in the Indian serial Des Mein Nikla Hoga Chaand, for which she received the Favorite Child Award at the Star Parivaar Awards. She also appeared as one of the children in "Koi Mil Gaya".with preity

She made her debut in Puri Jagannadh's Telugu film, Desamuduru, starring opposite Allu Arjun. The film is about a crime reporter who falls in love with a sannyasi, played by Hansika. She also has a Hindi film entitled He: The Only One in where she will be essaying the role of a killer, hell-bent on taking revenge for her family.
Hansika made her debut as a leading actress in Bollywood with Himesh Reshammiya in Aap Kaa Surroor ? The Real Luv Story. She played the role of Himesh Reshammiya's lover Ria. The film was released on 29 June 2007 and was a moderate hit movie in India.

Hansika made her debut as a lead actress in the Kannada film Bindaas with Puneet Rajkumar. The film was released on 15 February 2008. She paired with Jr. NTR in the film Kantri, which was released in May 2008. The film was a moderate hit. She is also making her Tamil film debut in the 2010 film Mappillai opposite actor Dhanush, following which she has signed two more Tamil films, Engeyum Kaadhal opposite Jayam Ravi, and Velayudham opposite Joseph Vijay.
Buy
Hansika Motwani
Movies