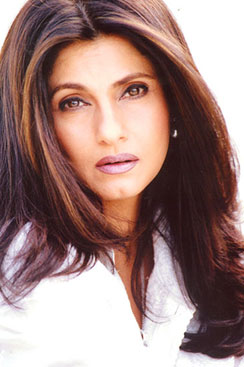 Dimple Kapadia was born on 8th June 1958. She is daughter of Chunnibhai Kapadia, Gujarati entrepreneur and Betty, her mother. She got married with famous film actor Rajesh Khanna. After marriage she came into film industries. Both have two daughters Twinkle Khanna and Rinke khanna. Both are also film actresses. She had two sisters Simple Kapadia and Reem Kapadia. Reem Kapadia did suicide because of some problems. Her first daughter Twinkle Khanna got married with Akshay Kumar, film actor and both have one son Araav who was born in 2002.

After success of film Bobby she took long break for her daughters. Her comeback in film industry with the film "Saagar" released in 1985 again with the Rishi Kapoor. In this film she gave very top scenes.

She performed many movies during 1980 -1990. For her film "Rudaali". She got National Film Award for this film as a Best Actress. Film was released in 1993. She performed many films such as played role of alcoholic mother which has divorced in film "Dil Chahata Hai" and interested in young Akshaye Khanna. Film was directed by Farhan Akhtar. Again she performed with Rishi Kapoor in film "Pyaar Mein Twist". She also performed film which was in English Language named "Being Cyrus
Buy
Dimple Kapadia
Movies